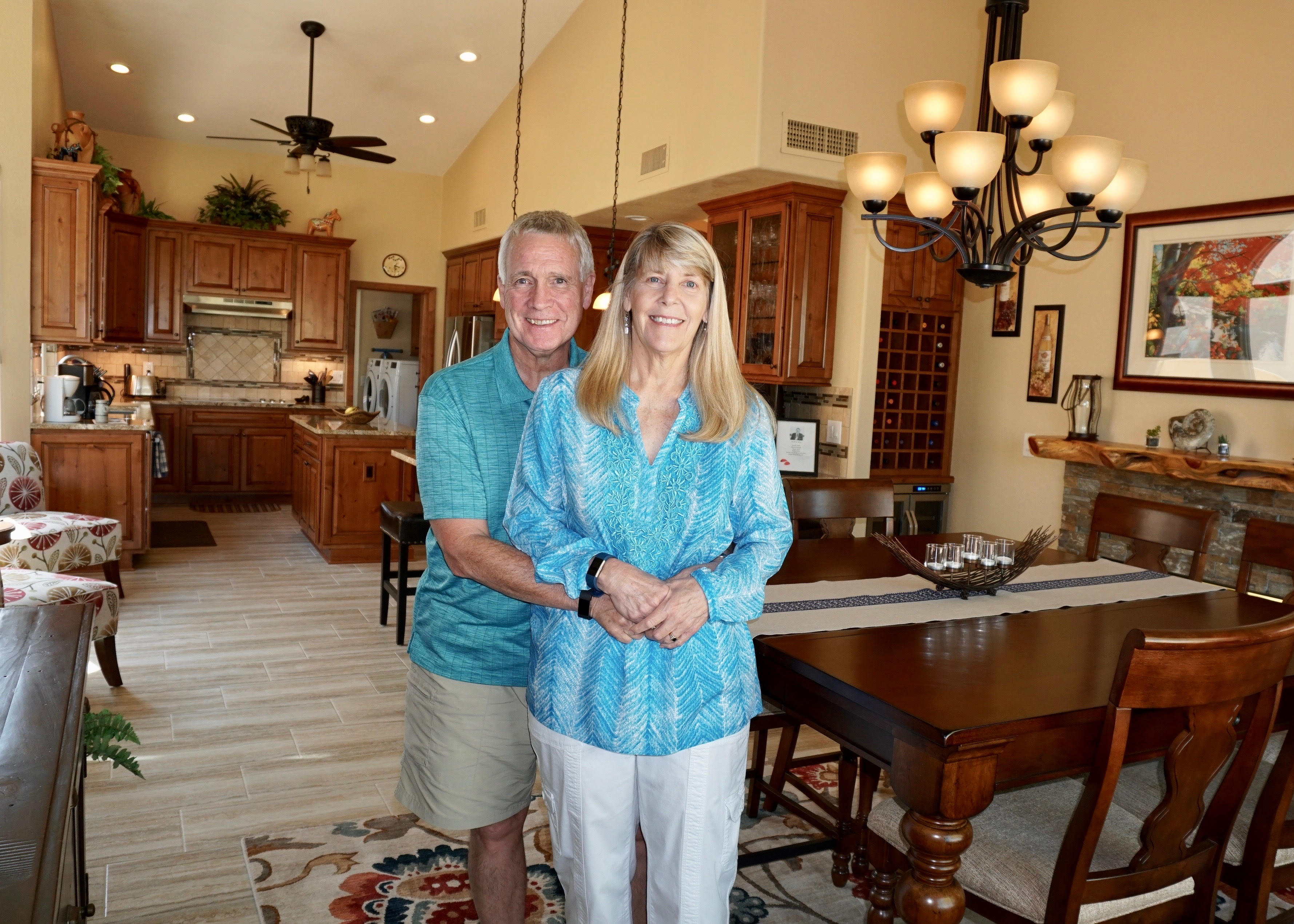 When Bill and Linnea Boaz decided to make SaddleBrooke their permanent home after a five year hiatus, they set their sights on finding an open floorplan similar to that of their Oregon home, hoping to replicate its open earthy feel. Transfixed by the mesmerizing backyard view of a resale home which overlooked the SaddleBrooke 9’s #3 Fairway with lake, fountain and mountains behind, the Boazes contemplated something they’d never done before—purchasing an undesirable house that, according to their realtor would require a total gut job to renovate. While its front courtyard and backyard were inviting spaces, the home’s interior was dated with an abundance of columns, wall-to-wall mirrors and five different floor coverings. With a background in finance, the couple knew that they’d be building on the solid investment of a breathtaking premier view, a limited commodity in the nearly built-out community.

With the help of Jo Sauvageau of JS Design, the Boazes set about reimagining the floorplan to suit their lifestyle and managed their material selections from afar via computer as they returned to sell their Oregon home. “I told her I’m not into grey, white or black; I prefer warm colors that remind me of the Pacific Northwest,” shared Linnea. With that in mind, Jo was able to find a stone look easy-care porcelain tile which, excluding bedrooms, was laid in an offset horizonal brickwork pattern throughout the house, effectively tying the living spaces together for improved flow. Adding to the congruity and flow are new beefier baseboards and oil-rubbed bronze fixtures and fans. 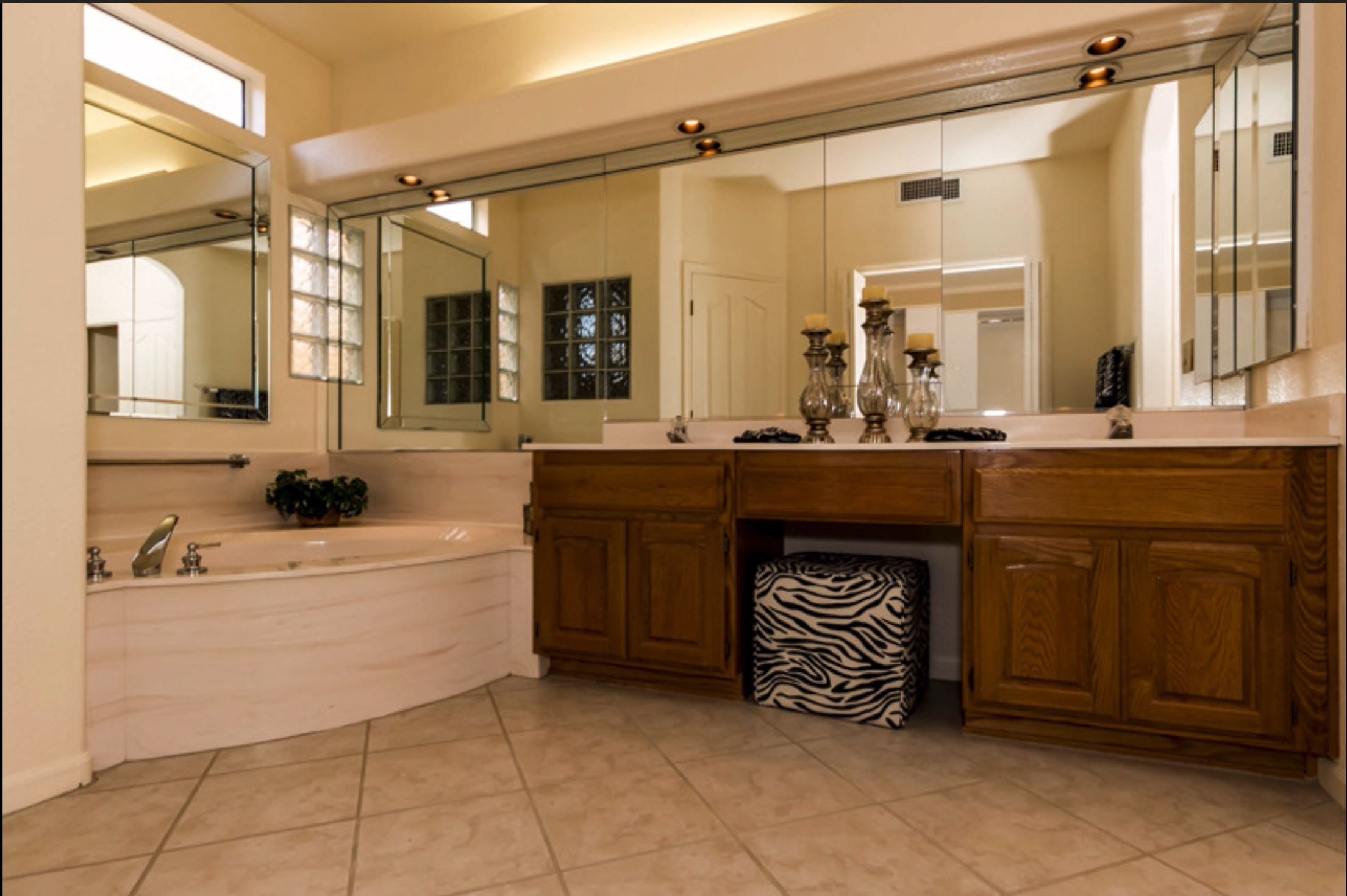 Eschewing the need for a formal dining room, the Boazes had the fussy colonnaded open dining area with ornate brass chandeliers converted into a dedicated office for Bill with a double door entryway. Half columns that flanked the opposing hallway were also removed and the arc of the archway flattened for a more modern aesthetic. With its former carpet flooring removed, the formal living room became part of a larger great room space flowing into the kitchen and adjoining family room, the latter now repurposed as a less formal dining space.

The dining room’s new location takes advantage of the gorgeous golf course, lake and panoramic mountain views while overlooking the elegant and efficient new kitchen. While the core kitchen footprint was maintained, cabinetry was removed and a soffit was reconfigured to allow for taller upper cabinets and a Lazy Susan corner cabinet replaced the builder’s space-inefficient blind corner cabinet. The kitchen island was also shifted slightly to allow a more functional work triangle. Knotty alder cabinetry topped with Golden Crystal Granite from Tucson Stoneworks lends a warm ambience with the vibrant movement of iron oxide golden veins swirling through a rich background of tans, creams, golds, chocolate brown, taupe and black.  The same striking granite tops a huge new 7’ x 4’ peninsula bar with built-in wine refrigerator and storage rack, enhancing the kitchen’s storage and entertainment functionality. The peninsula along with the family room entertainment wall forms an L-shaped divider featuring a double-sided fireplace refaced with earthy stacked stone and rustic free-form alder mantels on both sides. On the opposite side of the kitchen, new built-in shelving flanks the fireplace, providing storage and display space. 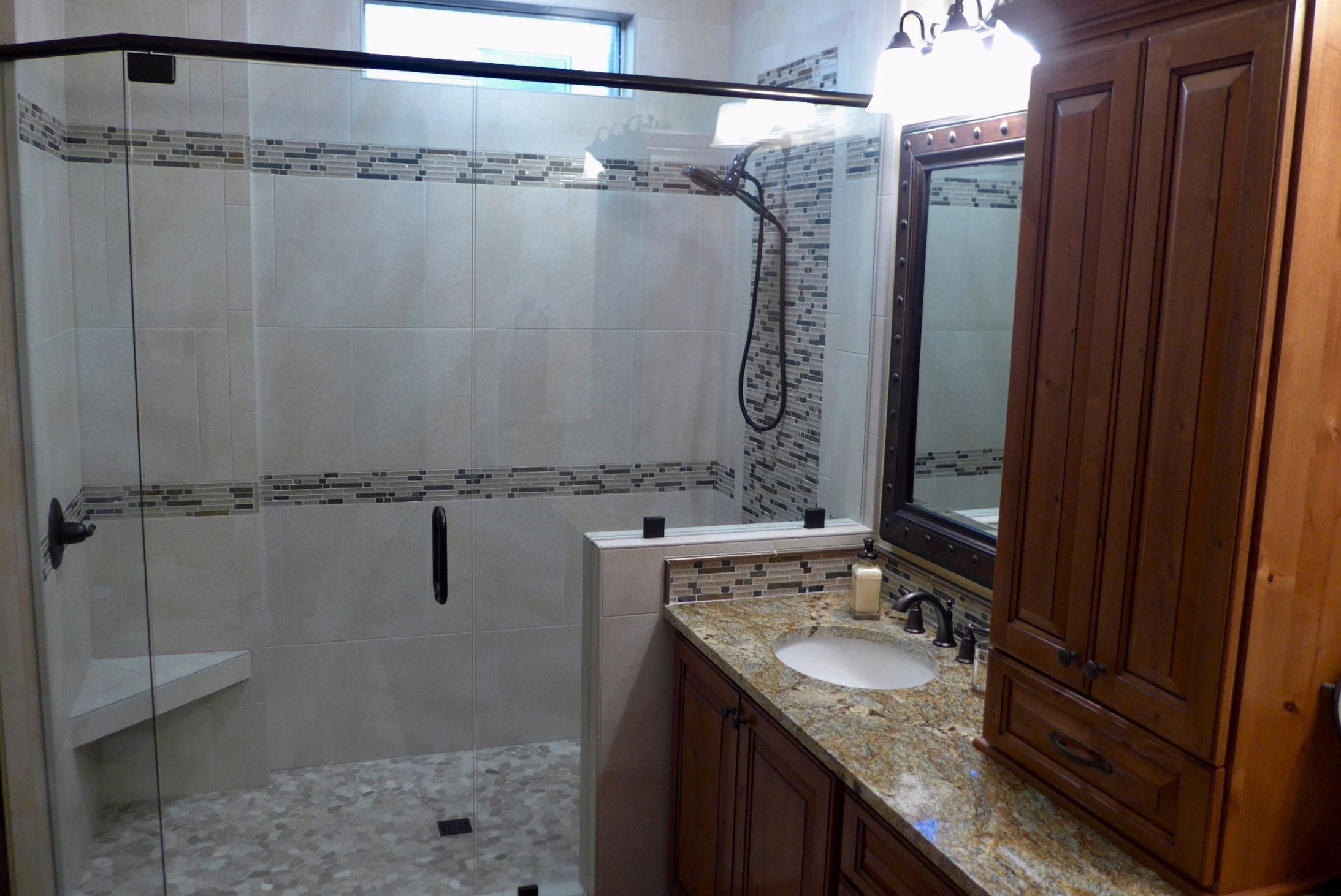 In the master bath, the awkward corner-set soaking tub was removed and the toilet, originally housed in the same room as the shower, was repositioned in the original shower space to form its own room, allowing space for a larger luxuriant walk-in shower and extended executive height vanities. Golden Crystal granite is also carried into the master bath with a tower cabinet separating his and hers sinks adorned with rich metal framed mirrors replacing wall-to-wall mirrors and oil rubbed bronze fixtures.

“The doors were what everyone seemed to be talking about,” related Bill Boaz at the wrap-up of the March SBCO Renovated Home Tour. From the front door to the interior doors throughout, bland and boring builder hollow-core doors were replaced with handsome knotty alder doors. At the front entry, the oddly unbalanced palladium window was removed to make way for a taller eight foot entry door. In addition to their beautiful form, the door replacements also addressed the poor builder planning by reframing the master bedroom entrance from a double to a single-entry door to eliminate the awkward swing that blocked the bathroom entry and replacing the laundry room door with a pocket door that would not block the dryer when opened. 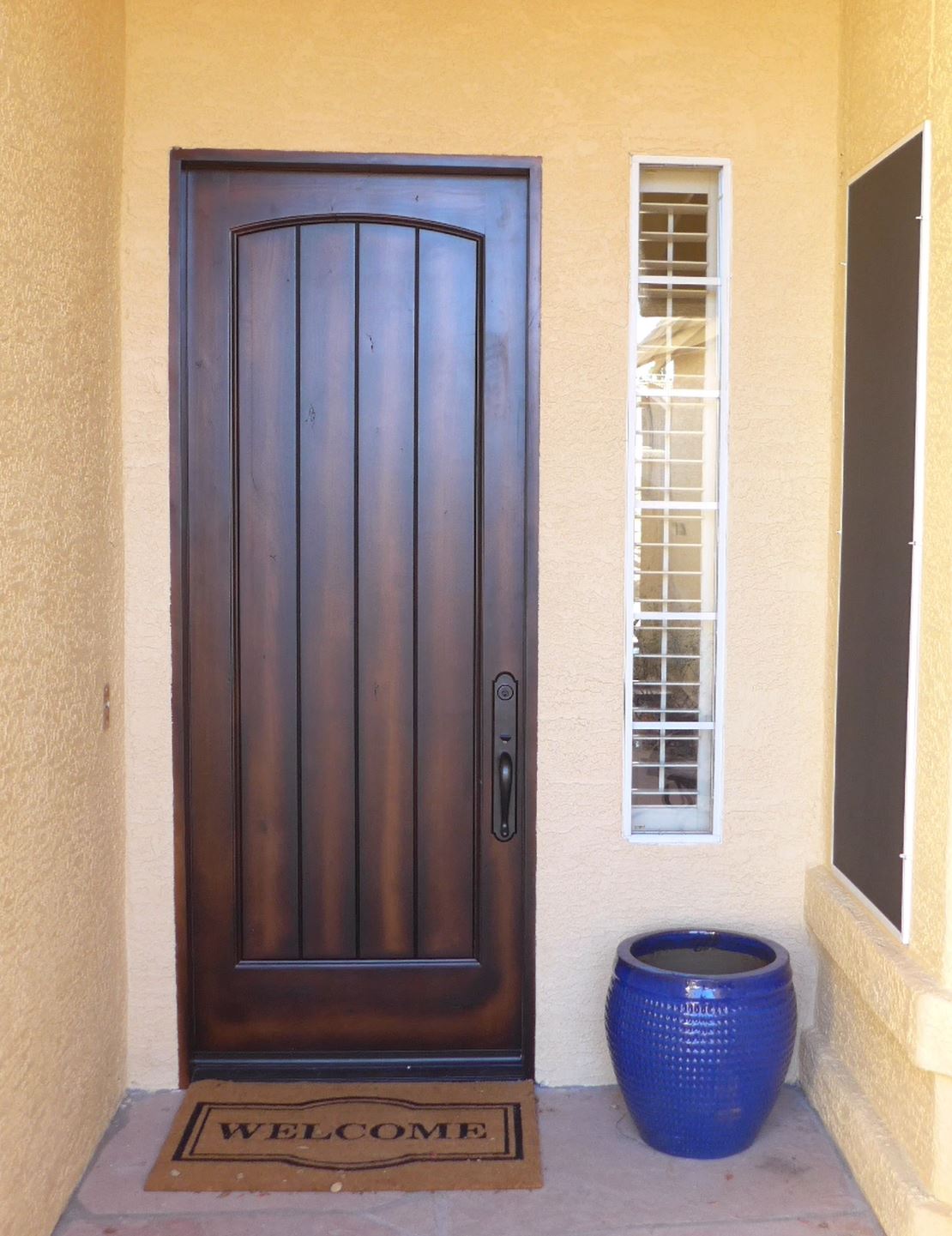 For approximately $150K, the Boazes succeeded in building a nearly new home atop the existing foundation, replacing the roof, HVAC, water heater, flooring, cabinetry and countertops. Beyond the cosmetic upgrades, the eco-friendly couple paid heed to some greener aspects of home renovation, investing in solar panels and energy efficient window replacements. Along with adding insulation in areas where it was non-existent and augmenting other areas, the Boazes now enjoy saving, on average, $90/month off their electric bills. Although, in hindsight, they would have added greater allowances for construction time and expense, the world travelers are content with a property they can leave with little worry, and a beautiful, customized Home Sweet Home awaiting their return.